Egg Alexander III – a product of the jeweler house of Faberge which intended, as a gift of Emperor Nikolay II, the mother Maria Fiodorovna, for Easter of 1909. At present the location isn't known. 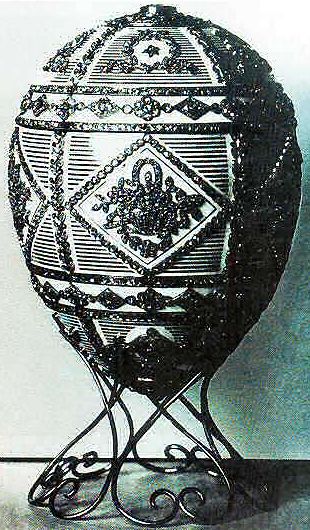 Materials It is made of platinum, gold, white matte enamel, diamonds. The surprise was the tiny bust made from lapis - azure, gold and diamonds.

Origin Nikolai II gift of the mother, to a widow empress Maria Fedorovne for Easter of 1909.

It is stored It is lost.

It is lost. Platinum Egg is completely covered by matt white enamel with gold lines. Groups of diamonds in the form of a rhombus are placed round the Egg middle, everyone with baskets from diamonds, colors and tapes. From both ends of Egg Large Diamonds under them most likely the Monogram of the Empress of the Widow and Year of creation are established. In Egg there was Alexander's III tiny gold bust on a support lapis - azures.

Look, on other eggs established for a family of the Emperor Faberge, Standart Yacht Egg, with tiny model of the Imperial yacht, or Orange Tree Egg.