Egg the Alexander III Equestrian Monument - is created by Faberge's jeweler house and planned as the gift of Emperor Nikolay II to empress Maria Fiodorovna for easter of 1910. Is in the Armory Museum of the Moscow Kremlin. 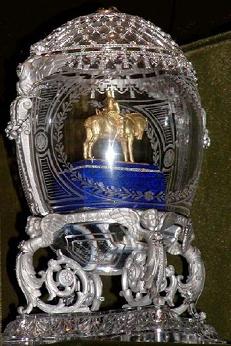 Stamp Firms - "К.FABERGE" (it is engraved in the italics).

Technics of execution Molding, stamping, engraving, carving on a stone. 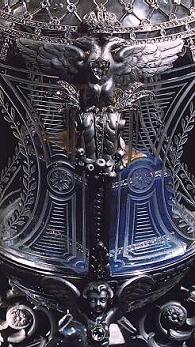 Origin Gift of emperor Nikolai II to empress Maria Feodorovna for Easter of 1910 Has arrived from Currency fund Narkomfina in 1927.

Egg from rock crystal consists of two parts. From above egg is decorated by an unprofitable platinum grid, covered with small diamonds, from two parties - platinum consoles, over which figures of heraldic two-headed eagles are placed. Above on egg large diamond through which date "1910" is visible is strengthened. The support represents four platinum winged semi figures, reinforced by a shaped crystal base. In egg the gold model of a monument to Alexander III on a high rectangular pedestal from a ljapis-azure is put. The model reproduces a monument of work of the sculptor of P.Trubetsky, erected on the Znamensky area of Petersburg about the Nikolaev station according to Nikolay II decree in memory of the father.

Pay attention, on their eggs established for a family of the Emperor Faberge, Colonnade Egg, created in honor of a birth at the emperor of the successor, or Napoleonic Egg devoted to century of a victory over Napoleon's army.