Alexander's III portraits as known as egg of twelve monograms was created by Faberge in 1896, as a gift of emperor Nikolay II of mother, empress Maria Fyodorovna for Easter of 1896. Is stored in the Hillwood Museum, Washington, District of Columbia, USA. 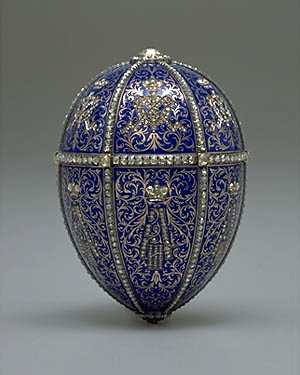 Origin It is presented by Nikolay II of the mother to empress Maria Fyodorovna for Easter in 1896, in memory of Tsar Alexander III. In the 1920th it is sold in Paris to the jeweler. Belonging to madam Berchilli, Italy. 1949, It is bought by Marjorie Merriviter's Post. 1973 it is presented to the Hillwood Museum, Washington, District of Columbia, USA.

It is stored Hillwood Museum, Washington, District of Columbia, USA.

Egg from the dark blue enamel, captured by six gold strips, with small diamonds also is halved by a strip, thus, creating 12 panels. Each of sectors is decorated with the Crown and Alexander III and Maria Fiodorovna's monograms. On the top part of egg there was a big diamond. Long time was considered that egg of 12 panels and egg Alexander's III portraits is different products, but researches showed that this one egg. The screen containing 6 portraits of the died Emperor was a surprise allegedly.

Look at other Easter eggs, the first egg presented by Nikolay II to the wife Rosebud egg and Mauve enamel.