Egg the Aleksandrovsky palace - is created in Faberge's jeweler workshop, as a gift of the Emperor to the wife, the empress Alexander Fiodorovna, for Easter of 1908. Is stored in the Armory Museum of the Moscow Kremlin, Moscow, Russia. 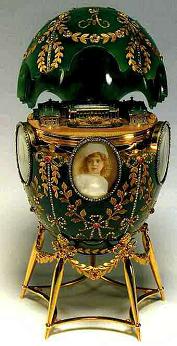 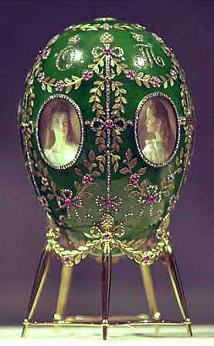 Technics of execution Enamel, molding, stamping, incrustation by gold and jewels, engraving, carving on a stone, a water color, gouache.

Origin It is presented by emperor Nikolai II to the empress Alexander Fedorovne for Easter of 1908. Has arrived from Currency fund Narkomfina in 1927.

The jade egg consisting of two parts connected by the hinge, is decorated by five tiny water color portraits of children of Nikolay II, the framed diamonds. Egg is inlaid by gold and jewels. Over portraits initial letters of names of children, laid out by diamonds are placed. On egg above flat triangular brilliants under which on a silver foil are executed by common people the monogram of the empress Aleksandry Fedorovny "AF" and date "1908" also are below strengthened. The model of the Aleksandrovsky palace is executed from gold and silver, a palace window - from rock crystal, the roof is covered by light green enamel. The model is strengthened on a gold little table with the engraved inscription "the TSARSKOJE RURAL PALACE". It was country residence of tsar Nikolay II and his family which seldom left walls of a palace and conducted enough secluded life, for what called them "Tsarskoje Selo eremites". The support under egg is made in 1989 at the Moscow experimental jeweler factory by master S.Bugrovym under the sketch of artist T.D.Zharkovoj. The original support is absent.

Look, on other eggs established for a family of the Emperor Faberge, Alexander III Egg, created in memory of the penultimate Emperor of Russia, or egg created in honor of a birth of the successor of a throne, tsarevitch Alexey Colonnade Egg.