Egg the Karelian Birch - is created by Faberge's firm, planned as a gift of Emperor Nikolay II to the mother Maria Fiodorovna for Easter of 1917. Since 2009 in a constant exposition of the Museum of Faberge in Baden-Baden. 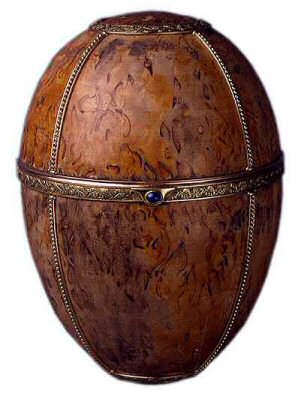 Materials it is made of gold and the Karelian birch. probably tiny elephant, made of gold, silver, diamonds and enamel was a surprise.

Origin Nikolay II Maria Fiodorovna's planned gift. The destiny of this Egg remained secret, till the end of 2002. In November, it was declared by the Russian National Museum (based in Moscow) that the last Imperial Egg was bought by a museum from private collection in London where egg was, since 1927.

Pay attention, on other eggs created by Faberge's jeweler house, incomplete egg of 1917 which egg Constellation of the Cesarevitch, intended for Empress Aleksandra Fiodorovna, and the first egg presented by Alexander Kelch to the wife Hen Egg of Varvara Kelch.