Egg Ribber as known as Egg with strips of dark blue enamel, is created by Faberge's jeweler house during the period from 1885 to 1891. Since 1962 there is in Stavros Niarkhosa's collections, Paris, France. 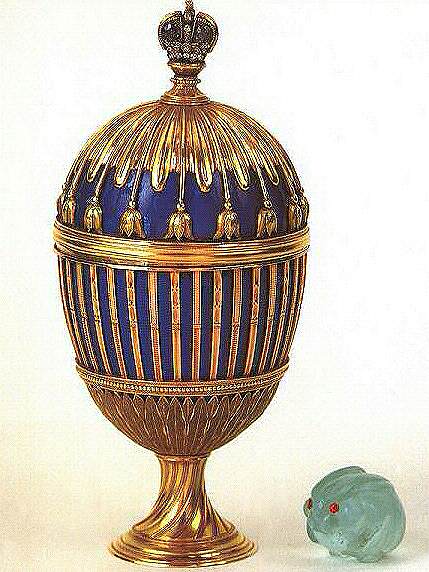 Materials It is made of green, red and yellow gold, sapphires, diamonds and transparent dark blue enamel. The tiny rabbit is made of agate and rubies.

Egg is made of three flowers of gold and enameled by transparent dark blue enamel. At egg top the Imperial crown, with cut sapphires and diamonds. Egg is established on a round gold support. Egg inside contains a small rabbit from agate, with ruby eyes. The original surprise is lost, it, most likely, was made of a moonstone.

Pay attention, to other eggs the Faberge created by the jeweler house, Yusupov Egg is presented by the Prince Felix Yusupov to the wife or Nobel Ice Egg created for nephew Alfred Nobel, doctor Emanuelya Nobel, the founder of the Nobel Prize.