Blue serpent clock egg, it was created in 1895 by Faberge, for empress Maria Fyodorovna by Easter of 1895 as a gift from the son, future Emperor Nikolay II. is stored by Monte-Carlo, Monaco, in a collection of the Prince Albert of II. 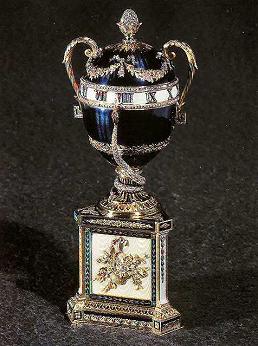 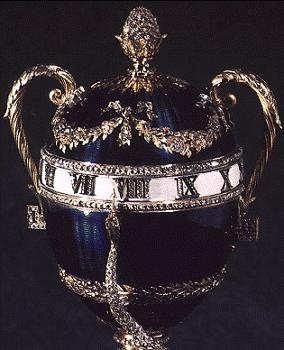 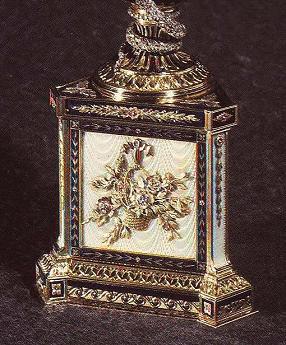 It is stored Prince Albert of II, Monte-Carlo, Monaco.

In the middle of the egg covered with dark blue enamel, the rotating dial of matte white enamel with small diamonds along the edges on which pink brilliants designate figures is located. The gold uvula of the snake covered with brilliants, shows time. Egg is framed with garlands from the roses, executed of four shades of the gold, fixed by bows from pink brilliants. Gold handles of stamping work come to an end in the form of an intricate geometrical figure. From above egg is topped by the pineapple covered with brilliants. The support - the basis consists of three gold plates covered with white matte enamel. Two of them are decorated by the gold trophies symbolizing the Science and War, on the third - a basket with a bunch of flowers. Subjects of the eggs could be inspired by the fashionable during the reign of Louis XVI clock in the form of boxes. For "Blue serpent clock egg" future emperor Nikolay II was paid 2 160 rubles.

Probably you will be interested by other imperial eggs Cherub with Chariot Egg, or уgg with tiny model of a cruiser Memory of Azov.