Caucasus egg 1893, it is created by Faberge's firm for empress Maria Fyodorovna by Easter of 1893. It is stored in a collection of fund of Matilda Geddings Grey, The Metropolitan Museum of Art, USA. 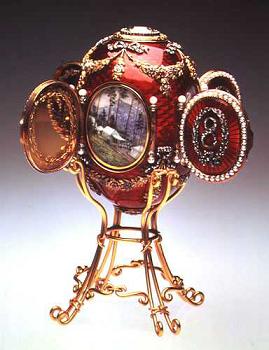 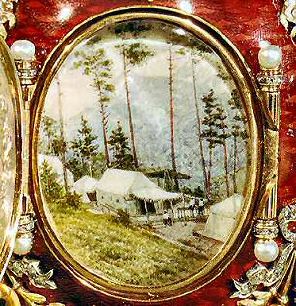 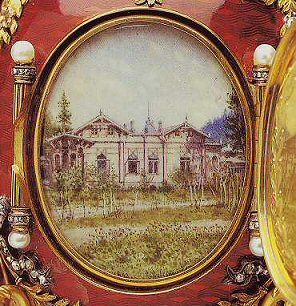 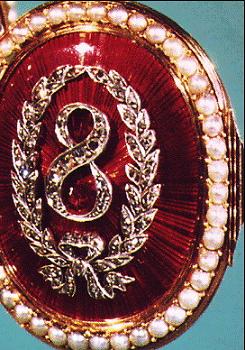 Technics of execution Transparent enamel on guilloche to a background, water color painting on a bone, stamping, molding.

Origin It is presented by emperor Alexander to III his wife to empress Maria Fyodorovne for Easter of 1893. About 1927 it is sold by All-union association "Antiques" Armandu Hammer, Hammer Galleries, New York. 1959 - Matilda Geddings Gray. 1972 - Matilda Geddings Gray Foundation, The Metropolitan Museum of Art, USA.

It is stored Matilda Geddings Gray Foundation, The Metropolitan Museum of Art, USA.

Egg-souvenir in late Louis XV style has four oval "windows", each of which is closed by an oval door with a border from pearls. In the center of each door - diamond wreath supporting a number, component number 1893. On each side of each window and door are golden wands with diamond bands and with the pearls on the ends. Behind each opening door - a miniature on an ivory, representing one of kinds of the Abastumansky palace on caucasus in which Grand duke George Aleksandrovich (1871-1899), the younger brother of emperor Nikolay II, being is sick of a tuberculosis, has spent the life most part. Miniatures painted by Constantine's court miniaturist Krizhitskim. On the top part of egg under the big "portrait" brilliant there is a tiny portrait of Grand duke George Aleksandrovicha. The portrait brilliant is surrounded by brilliants of a facet a rose and a laurel wreath. In the egg basis there is a portrait brilliant of the smaller size. In the top and bottom quarters of egg - a pink garland from the color gold, tied up by the platinum bows covered with brilliants. Egg costs on a support with the twisted gold legs simulating a bent tree.

We pay your attention to other Easter eggs of the Empress Renaissance Egg and to egg made in memory of Alexander III - "Alexander III Portraits".