Clock egg, it is created by Faberge by request of Alexander III as a gift to the wife, Maria Fyodorovna for Easter of 1887. 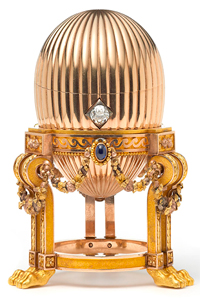 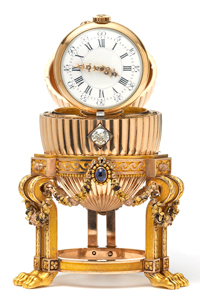 Origin It is presented by emperor Alexander III to the wife to empress Maria Fyodorovna for Easter of 1887. Until 2014 it was thought to be lost. In 2014, one of the collectors found at a flea market in the United States.

It is stored U.S. private collection.

This is one of the eggs donated by Emperor Alexander III to his wife Maria Feodorovna , it was made in St. Petersburg and at the time of the revolution kept in Anitchkov Palace . According to surviving documents is known that in 1922 it was in the Kremlin Armory . In 1964 it was exhibited as Lot number 259 at Sotheby's . After this long time nothing about the fate of this egg was not known. It was found in 2014 at one of the flea markets in the United States . Egg is made of gold and set on a gold pedestal decorated with precious stones . Surprise eggs are gold watch.

Look at others, works of art, Revolving miniatures egg also known as Egg of Rock crystal and Gold Pelican Egg the devoted centenary celebration of patronage of charitable establishments by Empresses of Russia.