Egg the Clover - is created by Faberge's firm as Nikolay's II Gift to the empress Alexander Fiodorovna for Easter of 1902. After revolution, is an exhibit of the Armory Museum of the Moscow Kremlin. 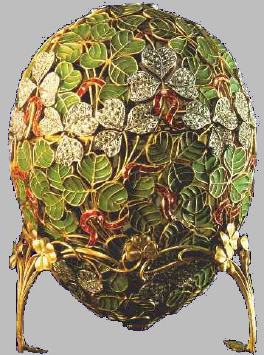 Stamp Master - "MP", St. Petersburg district Assay Control - a woman's head in a headdress with a sample of "56" and the initials of the district manager of Liapunov Ya "Yal".

Origin It is presented by emperor Nikolay II to the empress Alexander Fedorovne for Easter of 1902. Has arrived from the Moscow jeweler association in 1927.

It is stored The state museum of the Moscow Kremlin

Openwork egg with a cover on the hinge is executed from gold skany leaves of a clover, the part from them is filled with light green transparent window enamel, a part - small diamonds. Between leaves the narrow bent tapes gathered by small rubies are placed. On an openwork rim of egg - the image of an imperial crown, date "1902" and the monogram of empress Aleksandra Fiodorovna in a frame of flowers of a clover. The surprise is lost. But employees of a museum managed to find the unique archival document from which follows that the precious chetyrekhlistnik with 4 miniatures inside was strengthened. Possibly, on petals of a surprise portraits of imperial daughters (Olga, Tatyana, Maria and Anastass) were represented, therefore it was a symbol of happy marriage of Nikolay II and empress Aleksandra Fiodorovna, a symbol of connection of two loving people. On a belief was considered what to find a four-petal clover was a big rarity and good luck. Egg is executed in modernist style style with its floralny motives and refined outlines which as well as possible is suitable for an embodiment of an intimate family subject.

Will pay your attention to others, eggs gifts of the emperor, Danish Jubilee egg, and created in memory of stay of the tsar with the tsarina in Pervoprestolnoj to gold-domed capital during Easter celebrating in 1903 Moscow Kremlin Egg.