Egg Coronation of 1897, most expensive of Faberge eggs - Nikolay II gift to the wife Alexander Fiodorovna in honor of crowning for Easter 1897. There is in Victor Vekselberg's collection, Moscow, Russia. 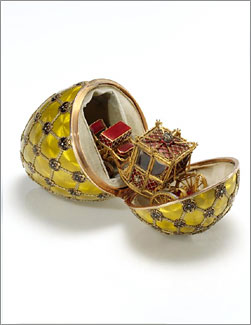 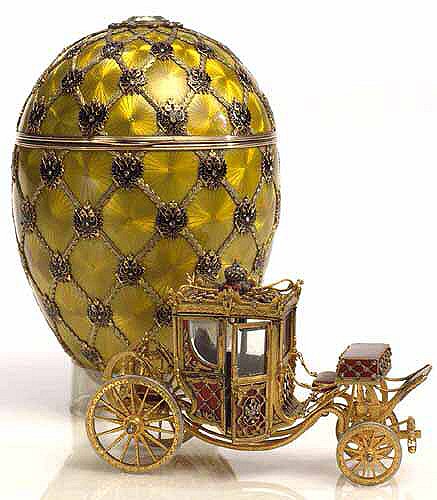 Materials Egg - gold, a transparent yellow lime, diamonds. The carriage - gold, platinum, red enamel, diamonds, rubies and rock crystal. Nowadays lost - a coulomb, an emerald or diamond, and the stand made from silver - the overgilded wire. 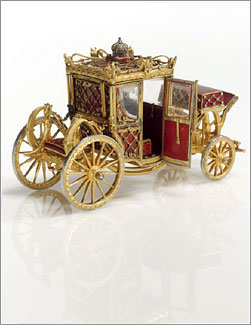 Egg has a deep gold shade, it is captured by a gold lattice inlaid with brilliants on which crossings the Arms of Russia, and in each of sectors sun rays. Above Eggs - the Big diamond under which date 1897 is visible. Style of egg was is taken from clothes of the empress in by which it was present on coronation. Surprise is the coronation carriage, - a tiny breadboard model in length of 3 and 1/6 of the inch, made of gold and enamel - an exact copy of the carriage used at crowning of Nikolay II and his wife in 1896. "Curtains" are engraved directly on windows from rock crystal. The decorated door handles, in the size it is less, than rice grain, turn, opening and closing doors on a latch. The carriage case is suspended on thongs which will amortize, as the presents leather also the case on the chassis, thus, rocks at crew movement.

Pay attention to others, jewelry of empresses, egg created in memory of the penultimate emperor of Russia Egg Twelve monograms and egg clock or Madonna lily.