Egg the Danish palaces was created in 1890 by Faberge, for Emperor Alexander III as a gift to empress Maria Fyodorovna by Easter of 1890. Since 1972 it is stored in The Metropolitan Museum of Art, USA. 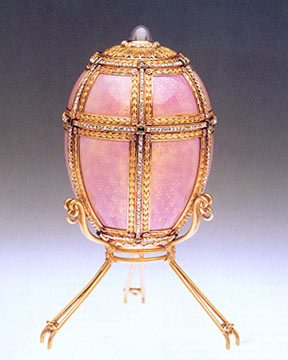 Materials Egg - green and pink gold, lilac opal, sapphires, an emerald, brilliants of a facet a rose, a pocket and a lining from a red velvet; a screen - green and color gold, a water color on nacre.

Technics of execution The transparent enamel on a guilloche background with crosses, casting, chasing.

Origin It is presented by emperor Alexander to III his wife to empress Maria Fyodorovne for Easter of 1890. About 1927-1930 it is sold by All-union association "Antiques" Armandu to Hammer, Hammer Galleries, New York. 1937-1953 - Mr. And Mrs. Nicholas Ludwig, New York. 1962 - Private Collection, USA. 1972 - Matilda Geddings Gray Foundation, The Metropolitan Museum of Art, USA.

It is stored Matilda Geddings Gray Foundation, The Metropolitan Museum of Art, USA.

Egg is made in Louis ХVI style. Six vertical and three horizontal strips of embossed laurel leaves separated egg in twelve sections. Each point of intersection marked by a round emerald and surrounded by four gold roses. At the top of the egg is stamped medallion of acanthus leaves divergent, centered on a gray-blue star sapphire round, surrounded by diamonds. The bottom of the egg is decorated with a medallion of acanthus leaves embossed intertwined. Egg surprise - the developing ten-panel screen, which frame is made of mesh circles and costs on legs with the Greek meanders. Each frame is surmounted by a carved wreath of colored gold. On each side a wreath - two stamping laurel branches. Each panel is painted by court miniaturist Krizhitskim Constantine, signed and dated 1889. Depicted in the miniatures of residence of Empress Maria Fyodorovna in Russia and Denmark (from left to right): 1. Imperial yacht "North Star". 2. Amalienborg Palace in Copenhagen. 3. Manor Hvidore around Copenhagen. 4. Castle the summer residence of Fredensborg.5. Bernsdorff Castle in Copenhagen. 6. Kronborg Castle in Elsinore. 7. Cottage Palace in Peterhof. 8. Cottage Alexandria in Peterhof. 9. Gatchina Palace near St. Petersburg. 10. Imperial yacht "Princess."

The next egg was created by Faberge Memory of Azov egg, and the last egg bestowed by Emperor Alexander III to his wife becomes Renaissance Egg 1894.