Diamond trellis egg 1892, it is created by Faberge's firm for empress Maria Fyodorovna by Easter of 1892 as a gift from the husband, Emperor Alexander. London, Great Britain is at present stored in a private collection. 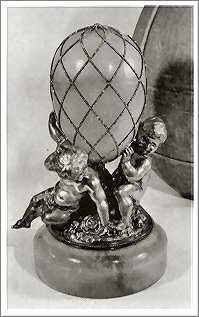 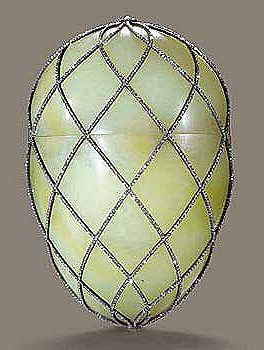 It is stored Private collection, USA.

Egg is executed from translucent pale-green bowenites and concluded in a silver lattice with the gold fastenings, inlaid with brilliants of a facet a rose. In the top and bottom parts of egg diamond sockets are located. The basis now lost, represented round faintly - a green stone plate with three silver cherubs holding the egg. These three boys as consider, represented three young sons of emperor Alexander III and empresses Maria Fyodorovny: Nikolay (the future emperor Nikolay II, 1868-1918), George (1871-1899) and Michael (1878-1918). The surprise, was the first mechanism developed in a workshop Faberge. It represented a figure of an elephant from an ivory and a key for mechanism factory. Figurine of an elephant with a small golden tower was partly enameled and encrusted with diamonds. On the sides of figurines deposited gold ornament in the shape of two crosses, each with five white stones. The forehead of an elephant has been decorated by the same stones. The tusk, a trunk and a harness have been decorated by small diamonds. The figure of an elephant has been repeated in 1900 in Egg "Pine cone", made for Varvara Kelch. From within egg is imposed by the white atlas and has space for a figure of an elephant and a key.

We pay your attention to a casket Necessaire egg and to the first egg presented by Emperor NikolaemIi to the wife to the empress Alexander Fedorovne Rosebud Egg.