Egg the Fifteenth anniversary of reign - is created by Faberge's firm, as a gift of Emperor Nikolay II to the empress Alexander Fiodorovna, for Easter of 1911. Since 2004 Moscow, Russia belongs to Victor Vekselberg. 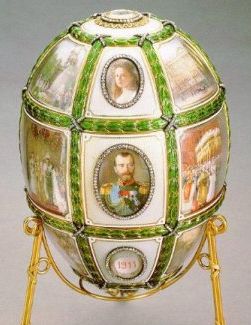 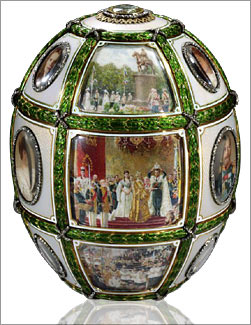 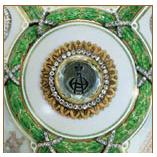 Origin Nikolay II Alexander Fiodorovna's gift for Easter 1911, it is not known, how Egg arrived to the west. Possibly - it was sold by the high Russian official to the friend in the United States. 1966 - Forbes Collection, New York. 2004 - Sotheby's auction New York - Victor Vekselberg, Moscow.

Egg the Fifteenth anniversary of reign is divided into eighteen sectors with 16 miniatures, miniature painter Vasily Zuyev. Seven oval miniatures portraits of the Imperial family in a diamond framework. 9 more miniatures, represent important events from Nikolay's II life. In two diamond framework below Nikolay and Aleksandra's miniatures of date 1894, date of wedding of Nikolay and Aleksandra, and 1911, the fifteenth anniversary of crowning. At egg top Aleksandra Fiodorovna's imperial monogram under the large diamond, surrounded with small diamond, in the egg basis as the large diamond in an environment of the small is established.

Pay attention, on other eggs created for a family of Emperor Faberge, egg the Alexander III Equestrian Monument, with tiny model of a monument to the Emperor standing in Petersburg, or the egg Romanov Tercentenary.