Egg the Gatchina palace is created by Faberge's jeweler house as the Gift of Emperor Nikolay II to mother Maria Fiodorovna for Easter 1901. It contains a copy of the Gatchina palace, the residence of the widow empress out of St. Petersburg. Is an exhibit of an art museum of Walters, Baltimore, the State of Maryland, the USA. 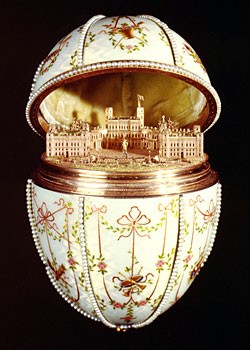 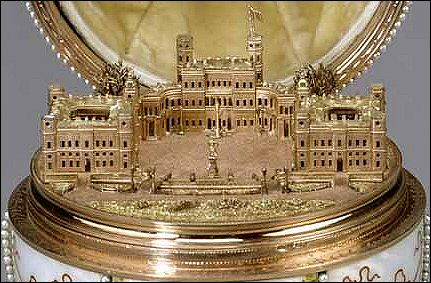 Origin Nikolay II Maria Fiodorovna's gift for Easter 1901, in 1920 it is bought by Alexander Polovtsov, in Paris, it is probable from officials of the All-union Antiques association. In 1930 it is sold to Polovtsovs, together with 1907 Egg the Rose Trellis, to Henry Walters's agents from Baltimore, the State of Maryland. In 1936 it is shown in Art Gallery Walter and with 1952 at a constant exhibition in Art Gallery Walter, Baltimore, the State of Maryland, the USA.

Egg is divided into twelve groups by pearls lines. In the basis and at egg top diamonds, but the monogram and year of manufacture which have been possibly established below them are established, have been removed. Gold Egg is enameled by white enamel, and decorated by green and gold leaves, pink roses and red tapes. At opening Egg shows a tiny exact copy of the Gatchina Palace, a residence of the Widow of the Emperor out of St.-Petersburg. The palace is executed on so much precisely that it is possible to distinguish such details as tools, a flag, and landscape elements, including trees.

We pay your attention to others, eggs presented by the emperor, Basket of Wildflowers egg, or Danish Jubilee Egg.