Egg a gold pelican of 1898 of Faberge - Nikolay II gift to the mother Maria Fiodorovna for easter of 1898. In 1947 it is presented and is exhibited at a museum of the fine arts of Virginia, Richmond, the USA. 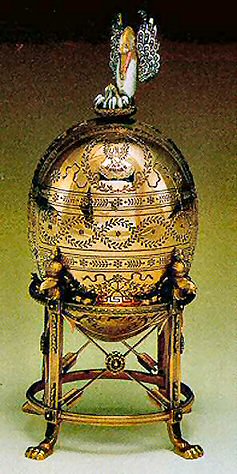 Materials made of red gold, diamonds, pearls, gray, pink and iridescent blue enamel and watercolor on ivory. Stand is made of gold.

Origin It is presented by Nikolay II to the mother Maria Fedorovne, in 1898. In 1930, sold the Gallery Hammer, New York. Between 1936 and 1938, the purchased Lillian Thomas Pratt. In 1947 collection of dead Lillian Thomas Pratt, it is transferred in the Virginia Museum of Fine Arts, Richmond, USA.

It is stored Virginia Museum of Fine Arts, Richmond, USA.

Egg of the Pelican - one of few Eggs who isn't enameled on the majority of its surface, it is made of the engraved red gold in steel of empire, at top of egg a pelican covered with iridescent gray and sine-pink enamel. The pelican feeds the children in a nest, a symbol of parent care. Egg is engraved with classical motifs, anniversaries 1797 - 1897 Egg of the Pelican marks centenary celebration of home nursing of charitable establishments by Empresses of Russia. The establishments based mainly for formation of daughters of the nobility. Surprise eight miniatures on an ivory, from the image of the educational institutions, everyone in a pearl framework. Egg is established on gold, four foot to a support.

Pay attention to others, jewelry of empresses, egg Lilies of the Valley and clock Cuckoo Egg.