Hen egg 1885, created by Faberge for the Emperor Alexander III as a gift to Empress Maria Fedorovna for Easter, 1885. Is stored in the collection of Victor Vekselberg, Russia, the city of Moscow. 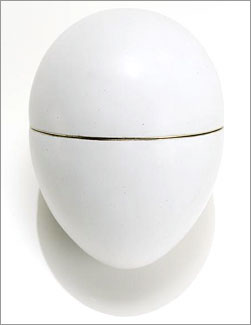 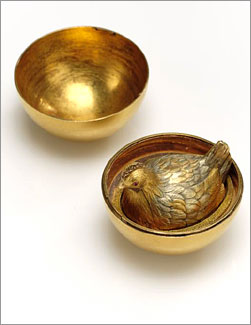 Egg from gold is covered polished opaque white, simulating a shell, enamel; shutters keep on three bayonet locks. Inside – "yolk" of matte gold which, opening, Contains a figure of a chicken from color gold in a nest with a suede lining and the edges engraved on gold representing straw. The plumage is executed from alternating color gold, a head – from yellow, and a comb and ear rings – from red. All surfaces are carefully engraved, eyes are executed from rubies-cabochons. The case of a chicken opens by means of hidden at the tail-end of the hinge, on a paunch are engraved yellow gold of a pad. The chicken, in turn, contained other surprises (presumably imperial crown decorated with diamonds, And in it - a chain with two ruby яйцевидными coulombs), considered lost after sale of egg by Bolsheviks in 1920th years. In account 1885 egg cost is specified as 4 151 rouble.

Probably you will be interested by other products Hen Egg with Sapphire Pendant 1886 or Necessaire egg.