Lapis Lazuli Hen Egg, as known as Lyapis-lazurnoye egg, is created by masters of the jeweler house of Faberge. The first owner of egg is unknown, since 1965 the State of Ohio, the USA belongs to the Clevelend Museum of Art. 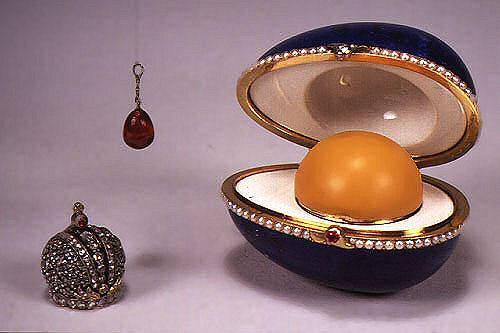 Origin The first owner of egg is unknown. In 1930 it was sold not to the known buyer. In 1940 it is bought by the Indian Erli Minshol. In 1965 it is presented to the Clevelend Museum of Art, the State of Ohio, the United States.

It is stored Cleveland Museum of Art, State of Ohio, USA.

Pay attention, on other eggs created by Faberge's jeweler house, Nobel Ice Egg presented to Alfred Nobel's nephew or Rothschild Egg more than hundred years belonging to a family of the American billionaires.