Lilies of the Valley Egg Faberge 1898

Egg Lilies of the valley of 1898 of Faberge - is presented by the tsar to the wife to the empress Alexander Fiodorovna for Easter of 1898. Since 2004 belongs to fund Svyaz Vremen, Victor Vekselberg's, Moscow, Russia. 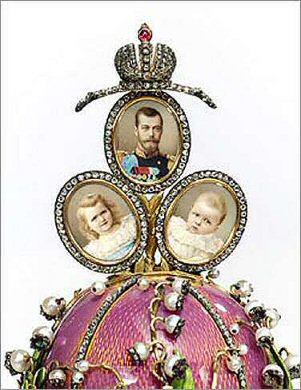 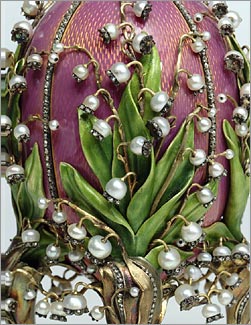 Egg "Lily Valley" with a portrait of Nicholas II and his children were presented with the king to his wife, Empress Alexandra Feodorovna on Easter 1898. Most of the exterior parts from carcasses and festoons of different shades of gold and ending with the leaves and stems of flowers, attached to its shell by means of miniature fasteners. The fasteners soldered to an underside of fastening details, are inserted into apertures in covers and are bent along an internal surface of a cover for stronger fastening of an ornament. By pressing pearls on each side eggs, from a crown, located above eggs, rise the miniatures of the emperor and his oldest daughters - Olga and Tatyana.

Pay attention to others, eggs of a family of the emperor, Pansy Egg or egg devoted the Trance of the Siberian highway which have connected the European and Asian part of Russia egg Trans-Siberian Railway.