Egg Mosaic - is created by jewelers of firm of Faberge, as a gift of Emperor Nikolay II to the wife Alexander Fiodorovna, for Easter of 1914. Since 1934 belongs to a ruling dynasty of English monarchs, in the beginning to Queen Mary, and after her death it is inherited by Queen Elizabeth II. 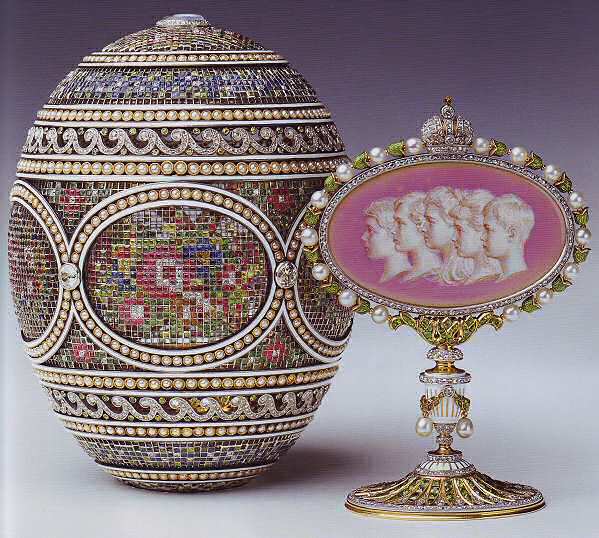 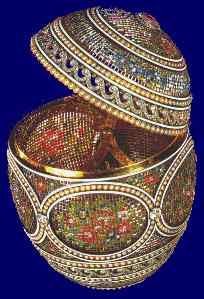 Origin Nikolay II Alexander Fiodorovna's gift. In 1933 it was sold by the All-union Antiques association to the unrecorded buyer. 1934, It is sold, to King George V and Queen Mary. 1953, it is inherited by Queen Elizabeth II.

Egg Mosaic consists of system of yellow gold belts to which the platinum network, partially decorated with diamonds, sapphires, rubies, emeralds, quartz, topazes and green pomegranate fastens. Egg is divided into five oval groups with pearls in borders of lines of opaque white enamel. Five large diamonds are established in each crossing. At top the moonstone through which the gold initials of the queen inlaid in an opaque, pale pink, enameled memorial board are visible is established. The surprise, consists from decorated with jewels and the enameled miniature, with the image of a profile of five Imperial children, at top the Imperial crown decorated with diamonds. The back party of a miniature enameled, with a flowers basket, around which year 1914 and names of five children. The oval basis having a form of a vase with a white stalk, is decorated with diamonds, emeralds, and two pearls. In a certain degree, the history of Imperial Easter Eggs of Faberge on it comes to an end. Faberge's firm made Easter Eggs for the Imperial family within 3 years. But in connection with severe time of military years, left so what exactly this egg appeared the last, made without restrictions in the budget.

Pay attention, on other eggs created for a family of the Emperor Faberge's jeweler house, the egg made at the beginning of the First World War the Red cross egg, and the last egg presented by Nikolay II to the wife to the Empress Alexander Fiodorovna egg Steel Military.