Egg the Moscow Kremlin - is created by Faberge's company as Nikolay's II Gift to the empress Alexander Fiodorovna for Easter of 1906. After events of 1917, remained in Russia and at present is a display exhibit, in the Armory Museum of the Moscow Kremlin. 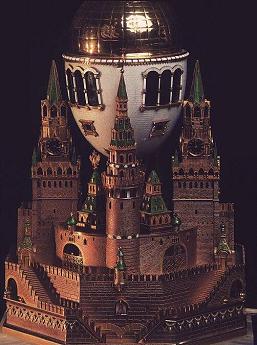 Origin It is presented by emperor Nikolay II to the empress Alexander Fedorovne for Easter of 1906. Has arrived from Currency fund Narkomfina in 1927.

The decor of the gold egg covered with white opal enamel with a dome and threefold windows is cast by architecture of the Uspensky cathedral of the Moscow Kremlin. In one of the glazed windows the interior of a cathedral represented on an oval glass plate, being in model is visible. On the round gold slip fixed on egg from below, white enamel executed date (1904). The support executed from color gold and silver, looks like the stylized Kremlin walls and towers with the roofs covered with green transparent enamel. On the Spassky tower repeated twice the coats of arms of the Russian Empire and Moscow, over gate - tiny icons "the Mother of God Kazan" and "Christ Almighty" are represented by enamel. The octahedral basis is executed from onyx. In model the musical mechanism which is got by a gold key then two "cherubs" songs - festive easter anthems sound is placed. This Easter egg was made in memory of stay of the tsar with the queen in the First-throned gold-domed capital during Easter celebration in 1903 that with enthusiasm was apprehended by all Russian society and, in particular, Muscovites. Carrying out this extraordinary work on a plan, masters of firm Faberge aspired to create an image of the ancient Kremlin - at the same time majestic and is fantastic - elegant. Before us a peculiar, masterly variation on the subject of the Kremlin architecture.

Will pay your attention, to other easter imperial eggs Faberge, Cradle with Garlands Egg, or egg with a tiny copy of country residence of the Tsar Alexander Palace Egg.