Egg Napoleonic - is created by jewelers of firm of Faberge as a gift of Emperor Nikolay II to empress Maria Fiodorovna, for Easter of 1912. Since 1972 the New Orleans museum of art, to the USA belongs to Matilda Geddings Grey's fund. 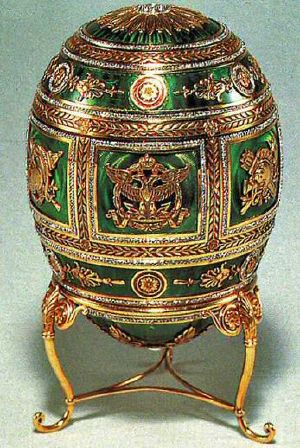 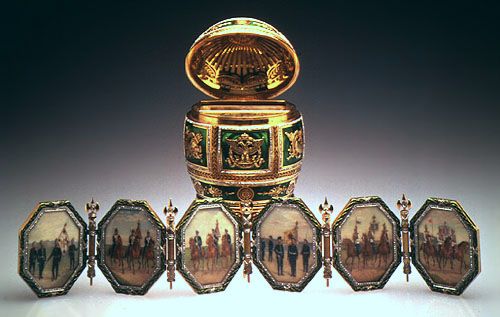 It is stored Matilda Geddings Grey's foundation, the New Orleans Museum of Art, the USA.

Made for the Empress of Widow Maria Fiodorovna, Napoleonic Faberge's egg marks century of a victory of Russia over Napoleon's armies and in particular a victory to Borodino in 1812. The empress of the Widow Maria served as the honourable colonel for six regiments represented in a water color, and its monogram decorates a back part of each miniature These miniatures, signed Vasily Zuyev and are dated 1912, form the screen which cores are executed in the form of an axe, an aggressive emblem used from the Roman times. Two-headed eagles and trophies of battle decorate green Egg. At Egg top, under diamond, a crown and Maria Fiodorovna's monogram.

Pay attention, on other eggs created for a family of the Emperor Faberge's jeweler house, the Czarevich egg created in honor of the successor of a throne, tsarevitch Alexey, and Catherine the great egg created in memory of one of the greatest Russian Queens.