Egg Night as known as egg Twilight, became one of the last eggs created by Faberge's firm. Probably, it was planned, as a gift to one of members of the Imperial family. The last time appeared in 1976, at Christie's auction, and it was sold to the anonymous buyer. 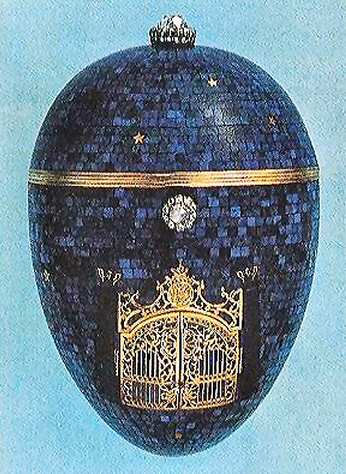 Materials it is made from Lyapis - azures, gold, diamonds, a moonstone.

It is stored Private collection.

Gold egg Night, with a mosaic of dark blue color, from a lyapis-azure forming the evening sky. Sideways eggs Golden Gate. When gate are open, the engraved garden of Peterhof is visible. The back part of egg is established with the Eagle of House of Romanovs, and the date cut out above, 1917. The Egg surprise Twilight is nowadays lost.

Pay attention, on other eggs the Faberge created by the jeweler house, Lapis Lazuli Hen Egg or egg presented by Emperor Alexander III to the wife in 1888 the Cherub with Chariot Egg.