Egg the Orange tree as known as egg the Laurel tree, the product of the jeweler house of Faberge, is ordered by Emperor Nikolay II as a gift of mother, empress Maria Fiodorovna for Easter of 1911. In 2004 it is bought by Victor Vekselberg, Moscow, Russia. 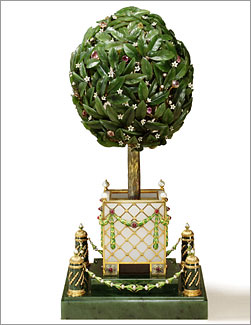 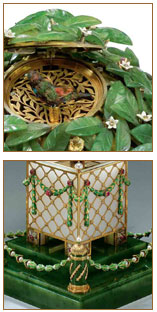 Materials it is made of gold, green-white enamel, nephrite, diamonds, rubies, amethyst, pearls and white onyx. 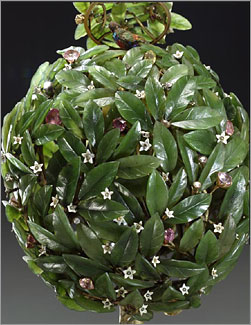 Origin Nikolay II Maria Fiodorovna's gift. In 1927 Egg was one of nine eggs sold by All-union association Antiques to Emanuel Snouman London. Since then passed through hands of five various owners and it was sold by the madam Mildred Kaplan Malkom Forbes in 1965. 2004 - Sotheby auction New York - Victor Vekselberg, Moscow.

Egg the Orange tree is a tree figured scraps created of nephrite, and the fruit decorated with jewels and flowers on the confused structure of branches, fruit, flowers are enameled by white enamel and established with diamonds, a keyhole and the tiny lever, is hidden among leaves, by pressing the lever the hinge round top of a tree opens and there is a winged singing bird who waves wings, turns the head, opens a beak and sings.

Pay attention, on other eggs created for a family of Emperor Faberge, egg the Fifteenth anniversary of the reign, created in honor 15 anniversaries of crowning of Nikolay II and Aleksandra Fiodorovna, or one of the most expensive Winter egg.