Egg Order of Saint George – is executed by Faberge's jewelers as a gift of Emperor Nikolay II to the mother Maria Fiodorovna for Easter of 1916. In 2004 it is bought by Victor Vekselberg, Moscow, Russia. 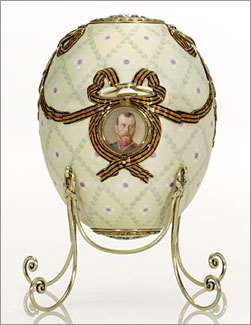 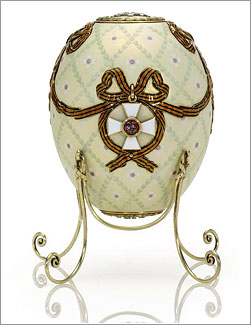 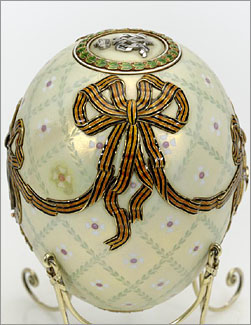 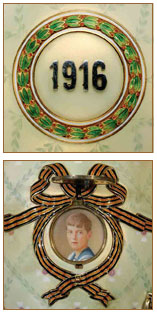 Origin It is presented by Nikolay II to the mother Maria Fiodorovna. In 1928 it is inherited by the oldest daughter of the empress Katerina. In 1960 it is inherited by Katerina's son - Vasily and it is sold to the Tom Lamley acting on behalf of the Company of Faberge. 1976 - And La Vyel Russi, INK., New York. 1978 - Forbes Collection, New York. 2004 - Sotheby's auction New York - Victor Vekselberg, Moscow.

One of Faberge's last eggs - "Order of Saint George" - was made in the First World War, in 1916. Only this egg from all fifty Maria Fiodorovna managed most to be taken out from Bolshevist Russia which she left in 1919 onboard the English battle ship "Malboro". The grid is put on egg from green leaves and a tape of the Award of Sacred George. From two parties of egg there is S. George's opening by means of the small button of the Miniature the award - Nikolay's II portrait and a portrait of Tsarevitch Alexey Nikolaevich. At egg top the silver monogram of the Empress of Widow Maria Fiodorovna, surrounded with a wreath. In the egg basis silver date "1916" surrounded with the same wreath.

Pay attention, on other eggs created for a family of the Emperor Faberge's jeweler house, the last presented by the Emperor to the wife egg Steel Military, and Egg Resurrection having mysterious history.