Egg Peter the Great - is created in Faberge's jeweler workshop as Nikolay's II Gift to the empress Alexander Fiodorovna for Easter of 1903. Since 1947 there is in a property of a museum of the fine arts of Virginia, Richmond, the USA. 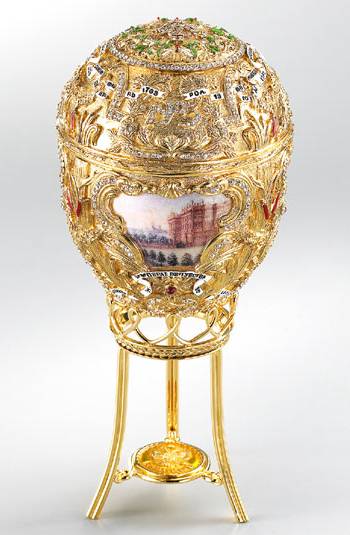 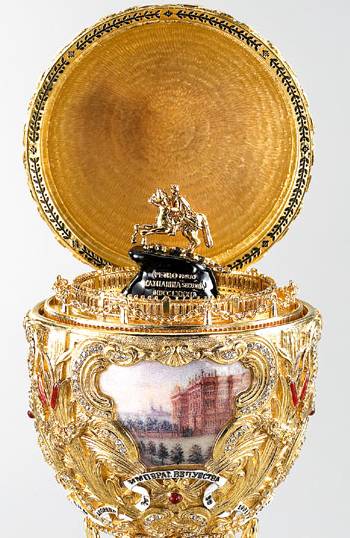 Materials It is made from red, green, and yellow gold, platinum, diamonds, square rubies, transparent yellow and opaque white enamel, rock crystal and a water color on an ivory. 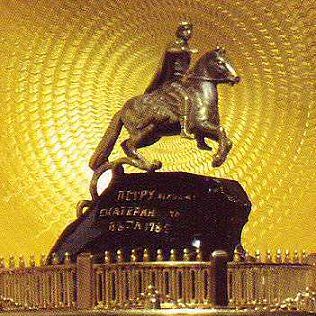 It is stored Virginia Museum of Fine Arts, Richmond, USA.

Executed in gold in extravagant rococo style, dates 1703 and 1903 in under diamonds appear from both parties of a cover. Four miniatures Peter the Great portrait, a wooden hut which as traditionally speak, has been constructed by it one, Nikolay II and the Winter Palace with 1.000 rooms as it was in 1903. Each of miniatures is covered by rock crystal. White tapes of enamel surround Egg. Inscriptions, "Emperor Peter the Great born in 1672, has based St.-Petersburg in 1703" and "the first small house of Emperor Peter the Great in 1703". Other inscriptions, "Emperor Nikolay II born in 1868, has entered on the Throne in 1894" and "the Winter Palace of Its Imperial majesty in 1903". Surprise appearing at egg opening, tiny model in the gold, a known statue of a monument of Peter the Great on Neva.

Will pay your attention, to other imperial Easter eggs Faberge, Nephrite Egg and the most beautiful egg Rose Trellis.