Egg the Pine cone, is created by Faberge's jeweler house, as Alexander Kelch's gift to the wife, Varvara Kelch-Bazanova, for Easter of 1900. Since 1989 is in Joan Krok's collection, San Diego, the USA. 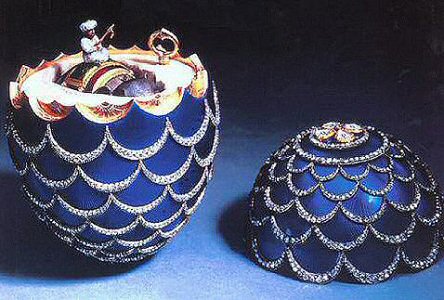 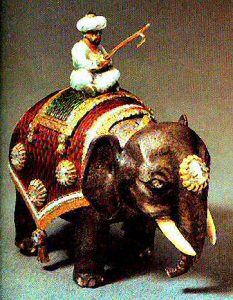 Origin Alexander Kelch's gift to his wife Varvara Kelch-Bazanova. In 1920 one of 6 Eggs Kelch sold in Paris, La Viil Russi. 1928, it is sold to the American buyer. 1929-1989 private collection United States. 1989, it is sold to Joan Krok, San Diego, California, the USA.

One end of egg, is decorated with four brilliants forming a quatrefoil clover, and forms date «1900». The opposite end is decorated with diamond under which a miniature of the young woman, it alleged by the Empress of the Widow Maria Fiodorovna. Egg originally had B.K monogram. under diamond, its replacement leads to the assumption that egg was planned as an imperial gift. The body of egg opens to show a surprise, a silver Indian elephant with ivory canines, with a saddle and the equestrian. The elephant mechanical, after plant a gold key goes and turns the head.

Pay attention, on other eggs created by Faberge's jeweler house for Varvara Kelch, Egg the Blossoming Apple-tree or Egg Chanticleer.