Egg the Red cross with portraits - is created in Faberge's jeweler workshop, as a gift of Emperor Nikolay II to mother Maria Fiodorovna for Easter of 1915. In 1947 it is presented to a museum of the fine arts of Virginia, Richmond, the USA. 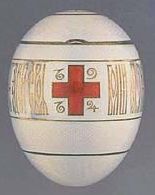 Materials it is made of silver, gold, iridescent white and transparent red enamel. Miniatures are made of nacre and a water color on an ivory. 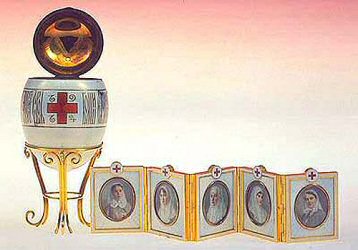 Origin Nikolay II Maria Fiodorovna's gift. In 1930 it is sold to Gallery Hammer, New York. In 1933 it is bought by Lilian Thomas Pratt. In 1947 the late Lillian Thomas Pratt's collection, is transferred in the Museum of the fine arts of Virginia, Richmond, the USA.

It is stored Museum of the fine arts of Virginia, Richmond, USA.

Pay attention, on other eggs created for a family of the Emperor Faberge's jeweler house, the egg made at the beginning of the First World War the Red Cross with the Triptych, and egg which couldn't be presented to Nikolay II to the mother Maria Fiodorovna from for the revolution which have happened in Russia egg the Karelian birch.