Egg the Red cross with a triptych – is made Faberge's jeweler house, as a gift of Emperor Nikolay II to the empress Alexander Fiodorovna, for Easter of 1915. In 1965 it is presented to the Clevelend Museum of Art, the State of Ohio, the USA. 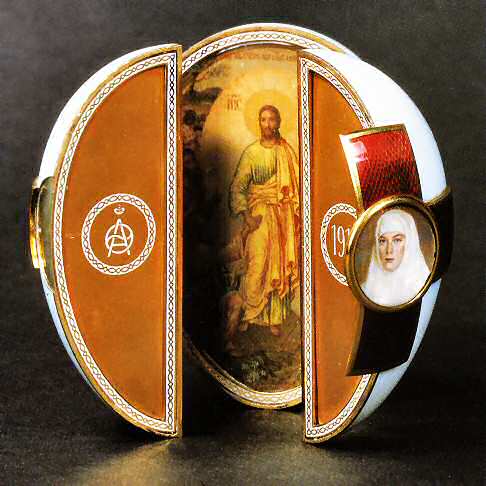 Materials it is made of silver, gold, iridescent white and transparent red enamel, a water color on gold.

Origin Nikolay II Alexander Fiodorovna's gift. In 1930 it was sold to the unknown buyer 1943, Erli Minshol bought by the Indian, In 1965 it is presented to the Clevelend Museum of Art, the State of Ohio, the United States. 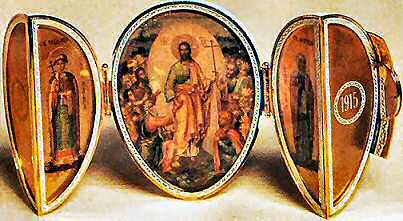 It is stored Cleveland Museum of Art, State of Ohio, USA.

Gold egg is covered with white enamel. From two parties of egg, a red cross from transparent red enamel. In the center of each cross, a miniature, according to Great Duchess Olga and Great duchess Tatyana in clothes of the Red Cross. By pressing Tatyana's portrait double doors open. The central scene - Revival of the Christ, on the left wing of a triptych Sacred Olga, the founder of a red cross and Sacred martyr Tatyana on the right. The edge of doors is executed with the monogram of the queen and with a year "1915".

Pay attention, on other eggs created for a family of the Emperor Faberge's jeweler house, one of the last expensive eggs - Egg Catherine the Great, and egg which Faberge didn't finish Constellation of the Cesarevitch.