Egg of Renaissance was created by Faberge in 1894, as a gift of emperor Alexander III to the wife, empress Maria Fyodorovna for Easter of 1894. It became the last gift of the emperor to his wife, on November 1 this year the Emperor died. Egg is stored in Victor Vekselberg's collection, Moscow, Russia. 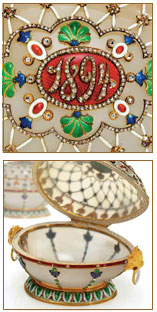 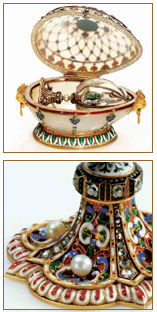 This egg-casket in style the Renaissance is last egg-souvenir made for the emperor Alexander III. (Alexander III has died after eight months after reception of a ready souvenir from Faberge). Egg - art imitation of a casket of work of Le of the Plenty stored now in the Dresden art gallery "Green arches". The egg-shaped casket from appearing through is bluish-dairy agate, lies horizontally on the oval gold basis. The top half or "cap", which opens on a hinge, is decorated with a trellis lattice consignment of white enamel with diamond and ruby ?? flowers on rebaptism. Top - lined in diamonds date "1894" in red strawberry-ovale transparent enamel framed with stylized green enamel bowls, egg-shaped motif of alternating red and white enamel. The lower lid is decorated with shells edging clear strawberry red enamel in between swirls of white enamel with diamonds. The edges of the valves inside the egg, and prominent in the open lid, decorated with floral border on a white enamel background. Lower leaf stripe bordered above strawberry red enamel and covered the bottom zones of the leaves with berries and blue shells "buckles". From both parties casket gold sculpture lions heads with rings in teeth are placed. Engraved base decorated with green enamel leaves a transparent, striped with the colors of red enamel. Location and description of a surprise even unknown. In invoice for payment 1894 egg cost is specified as 4 750 roubles.