Resurrection egg – doesn't belong to Imperial Easter eggs, its history isn't known, most likely, it was presented to Empress Maria Fiodorovna by someone from close friends, or members of the family. Is stored in Victor Vekselberg's collection, Moscow, Russia. 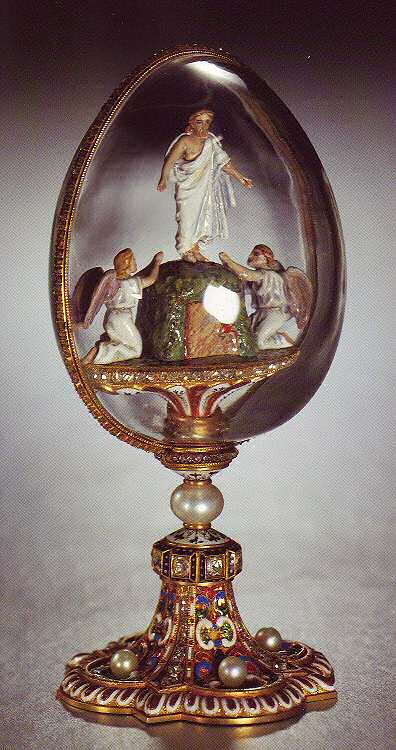 Stamp master Mikhail Perkhin and brand of the city of St. Petersburg.

Origin It is presented to empress Maria Fiodorovna by someone from friends or members of the family in 1885-1889. In 1922 it is bought by the London dealer, it is probable from the Russian officials of the All-union Antiques association. 1934, it is sold at Christie's auction, London. R Suensonu-Taylor United Kingdom. 1962-1976, belonged Memi Suenson-Taylor, the Lady Granchester. 1976, it is bought La Vil Russi, New York. Forbes New-York's 1978. With 2004, Victor Vekselberg, Moscow. 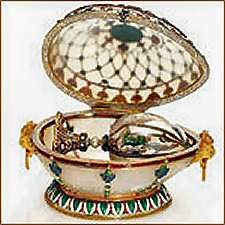 Egg Sunday - one of masterpieces Faberge who has been gracefully made in style of the Renaissance. A figure of the Christ towering over a grave, and two angels kneeling. Each figure is enameled. Egg from rock crystal with a vertical strip of diamonds, costs on the dome-shaped leg enameled by multi-colored enamel in style of the Renaissance both decorated with diamonds, and pearls. Egg of Revival has style of early works of master Mikhail Perkhin and a brand of the city of St. Petersburg to 1899. Egg Sunday until recently, unanimously considered as one of the Eggs presented by Tsar Alexander III to his wife, Maria Fiodorovna. It was shown at various exhibitions, including Victoria and Albert's exhibition in 1977. But Tatyana Faberge's recent researches, Charles Faberge's great-granddaughter, proved that for it there is no place in the list of Imperial Eggs. However, very intriguing hypothesis was put recently forward by Christopher Forbes, namely that Revival Egg - actually is a surprise which was originally stored in egg the Renaissance. It proves to be true that it was shown exactly so at an exhibition of 1902. Besides, style and coloring of both objects are actually identical, and the size of egg of Revival absolutely corresponds to an egg curvature the Renaissance. The account relating to egg the Renaissance mentions the pearls which use isn't explainable if it there was no part of a surprise.

Note, on the other eggs created by the jewelry house of Faberge, egg Spring Flowers, the history of which is unknown and egg presented by Alexander Kelch his wife Egg Pine cone.