Egg the Tercentenary of House of Romanovs - is created by Faberge's jewelers, as a gift of Emperor Nikolay II to the empress Alexander Fiodorovna, for Easter of 1913. After October revolution, remained in Russia and is an exhibit of the Armory Museum of the Moscow Kremlin. 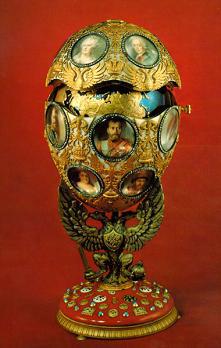 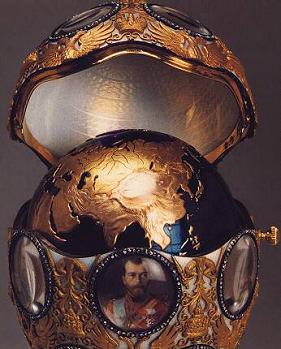 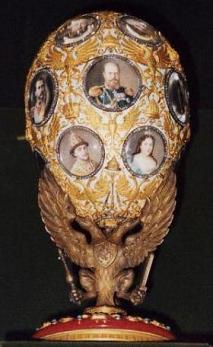 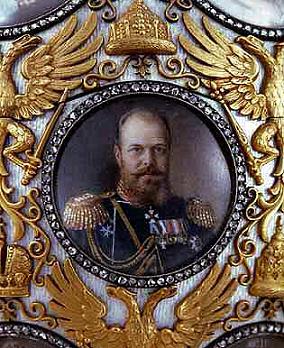 Origin It is presented by emperor Nikolay II to the empress Alexander Fiodorovna for Easter of 1913. Arrived from Narkomfin's Currency fund in 1927.

The egg executed to the tercentenary of House of Romanovs, is decorated with eighteen tiny portraits of representatives of a reigning dynasty. Above and below on egg flat brilliants through which dates "1613" and "1913" are visible are strengthened. In egg the rotating steel blued globe on which the gold unprofitable image of the Northern hemisphere is twice placed is strengthened: on one - color gold designated the territory of Russia in borders of 1613, on other - in borders of 1913. In a decor of the egg devoted to 300-year anniversary of a ruling dynasty, magnificently noted in the empire, elements of the state symbolics are plentifully used. The egg surface in space between miniatures in a diamond framework is decorated with stamping heraldic imperial wreaths and crowns. As a support the cast silver gilded figure of a stamp eagle strengthened on the round basis from purpurin, simulating the state board serves.

Pay attention, on other eggs created for a family of the Emperor Faberge's jeweler house, devoted to century of a victory over Bonopart egg Napoleonic, and egg the egg created at the beginning of the First World War the Red cross with triptych.