Rose quartz egg, is created by Faberge's jeweler house for one of rich customers, and in the form, reminds Clock or Madonna lily Egg, created for a family of the Emperor. 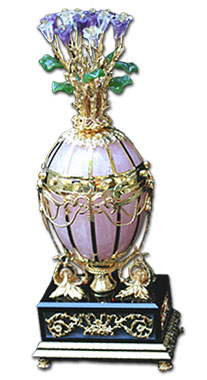 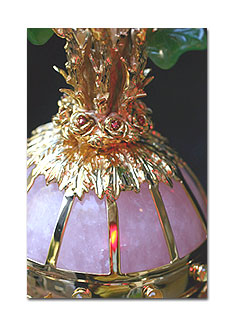 Egg in the form and idea is very similar to egg a bouquet of lilies created for a family of the emperor, but from for arrangements between the Emperor and Faberge about a ban of copying has a number of differences. Egg is made of pink quartz, from top down there are 12 gold lines which form 12 hours, the hand is executed in the form of onions with an arrow decorated with brilliants. Egg, represents a vase in which there is a bouquet of the lines executed from chalcedony, stalks and leaves of lilies are executed from gold, and pestles are decorated with diamonds. Egg is established on a stone from onyx decorated with gold and diamonds.

Pay attention, on other eggs the Faberge created by the jeweler house, Rothschild Egg stored more than hundred years in a family of the American billionaires or Blue serpent clock egg created for empress Maria Fiodorovna in 1895.