Egg the Grid from roses as known as Egg Rose Trellis - is created by Faberge's firm as the gift of the Emperor to the wife Alexander Fiodorovna for easter of 1907. Since 1952 in there is in an exposition of art gallery Walters, Baltimore, the State of Maryland, the USA. 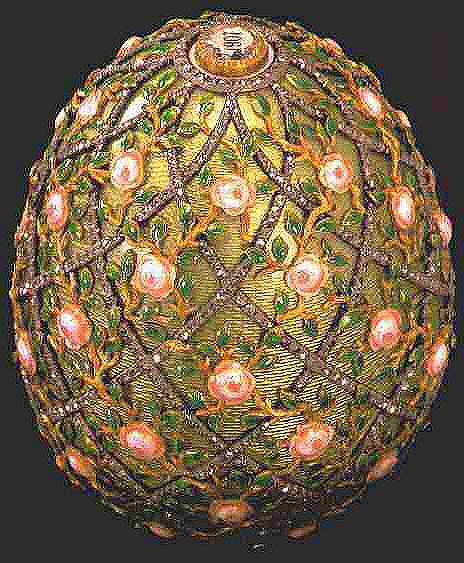 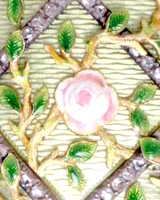 Materials It is made of gold, green-pink enamel in various shades, diamonds, and atlas alignment. Nowadays lost surprise was a chain made of diamonds and a water color on an ivory.

It is stored The Walters Art Gallery, Baltimore, Maryland, USA.

This beautiful gold Easter egg is enameled in transparent pale green color and a lattice with diamonds decorated with opaque light and dark pink roses from enamel and emerald green leaves. Diamond is established from both ends of this Egg, in a basis covering date "1907". Unfortunately the monogram which possibly was under diamond on the other hand, is absent now. Originally Egg contained the oval medallion decorated with jewels in which the surprise has been hidden. Research specifies that the diamond chain with a miniature of small Tsarevitch Alexey, on an ivory was a surprise. 1907 was one of several years when Egg for the Empress of Widow Maria costed more than a gift for Tsarina Alexanders. Other years when it happens, were: in 1895 Egg with Monograms, cost is more than Egg a rose Bud, in 1910 Egg the Monument to Alexander III cost is more than Egg the Colonnade, and in 1913 when Winter Egg costed more than Egg Romanov Tercentenary.

Will pay your attention, to other easter imperial eggs Faberge, Swan Egg, or egg with a copy of the favourite yacht of Nikolay II Standart Yacht Egg.