Rothschild egg, one of the most expensive eggs created by jewelers of Faberge. Long time, about existence of this egg wasn't known, as it didn't leave a family Rothschild. In 2007 it is bought by Faberge's Museum in Baden-Baden. 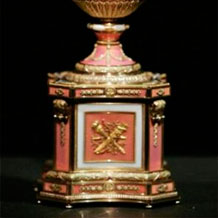 Origin It is presented in 1905 by Beatrisa Efrussi on engagement to the younger brother Edward Rothschild with Zhermena Halfen. Till 2007 was in family possession Rothschild. In 2007 it is exposed on Christie's auction, London. It is sold to Alexander Ivanov, Russia. Is in an exposition of a museum of Faberge to Baden-Baden. 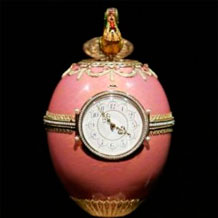 Long time, about existence of egg of Rothschild, wasn't what data. It wasn't exhibited on public and not resold. Within hundred years it was a family property Rothschild. Gold egg is covered with faintly pink enamel, on the face there are hours N.Rode. Rothschild egg in the form reminds Faberge Cuckoo egg of 1900, created for a family of the emperor, and Egg Chanticleer 1904, created for Varvara Kelch.

Pay attention, on other eggs created by Faberge's jeweler house, Clock egg which history not lime or the first egg presented by Emperor Alexander III to the wife in 1885 Hen Egg Faberge.