Egg the Yacht the Standard - is created by Faberge's jewelers, as a gift of Emperor Nikolay II to the empress Alexander Fiodorovna, for Easter of 1909. After October revolution of 1917, remained in Russia and it was transferred in the Armory Museum of the Moscow Kremlin. 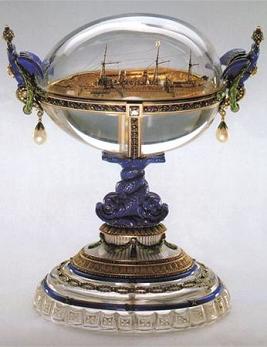 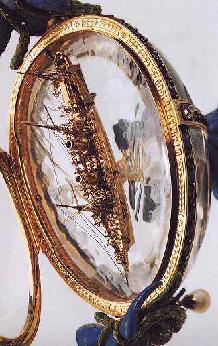 Stamp Firms - "К.FABERGE" (it is engraved in the italics); masters - "H.W."; the Petersburg district management - a female head in a kokoshnik, test "72".

Technics of execution Enamel, stamping, engraving, carving on a stone.

Origin It is presented by emperor Nikolai II to the empress Alexander Fedorovne for Easter of 1909. Has arrived from Currency fund Narkomfina in 1927.

Egg from rock crystal consists of two parts connected by the hinge. The gold frame of egg with a carved inscription "STANDART 1909", is decorated by brilliants, enamel and two figures of heraldic two-headed eagles from a ljapis-azure. The support in the form of two azure weaved dolphins has the basis from rock crystal. In egg there is the gold model of yacht "Standart" strengthened on a wavy plate simulating water from rock crystal, precisely reproducing appearance and equipment of the imperial yacht up to an imperial flag fluttering on a mast, tiny boats and rotating gold wheel. It was Nikolay II favourite yacht on which the family of the tsar spent much time in waters of gulf of Finland, until when the yacht was wrecked in coastal waters.

Look, on other eggs established for a family of the Emperor Faberge, Peacock Egg, or egg to 15 years devoted to a memorial from the date of crowning Fifteenth Anniversary Egg.