Egg Steel Military - is created by jewelers of firm of Faberge, was the last presented Emperor Nikolay II to the wife Alexander Fiodorovna for Easter of 1916. After revolution remained in Russia and it is transferred in the Armory Museum of the Moscow Kremlin. 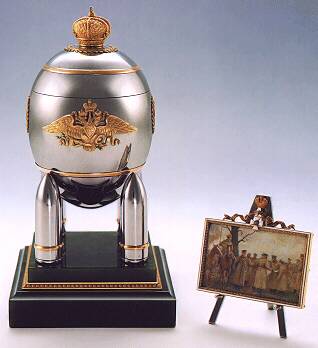 Origin It is presented by emperor Nikolay II to the empress Alexander Fiodorovna for Easter of 1916. Arrived from Narkomfin's Currency fund in 1927. 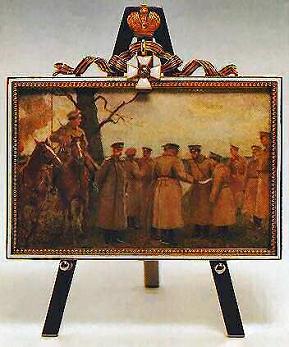 Steel egg is created in days of the First World War - heavy time both for Russia, and for an imperial family. Therefore its shape is strict, and the decor is official and dryish. Egg is decorated with a gold imperial crown and unprofitable images of the coat of arms of the Russian Empire, Saint George, date "1916", and the monogram of empress Aleksandra Fiodorovna. The support for egg is executed in the form of four shells strengthened on a pedestal from nephrite. A surprise of egg is the easel, in the form of a monogram of queen Aleksandra Fiodorovna on which the miniature executed by a water color on a bones, representing emperor Nikolay II with son Alexey, on a position of Russian armies is fixed. As egg was created in honor of rewarding of the tsar Order of Saint George IV of degree, the gold frame of a miniature is decorated with a black-orange tape and a white enamel cross of this award.

Pay attention, to other eggs created for a family of the Emperor Faberge's jeweler house, last of finished egg the Karelian Birch, and Egg Spring Flowers which history is unknown.