Egg the Swan – is given by Faberge's jeweler house as Nikolay's II gift to mother Maria Fiodorovna for easter of 1906. With 1995 is a property of fund of Edward and Maurice Sandoz, Lausanne, Switzerland. 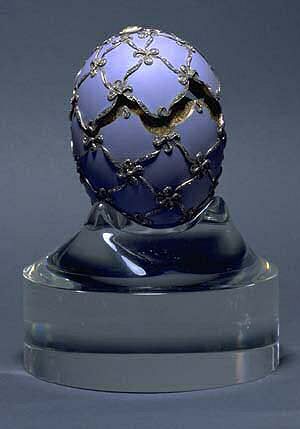 Materials Swan Egg is made of gold, matte opaque lilac enamel, diamonds. The tiny swan is made of the gold, the silvered gold and aquamarine. 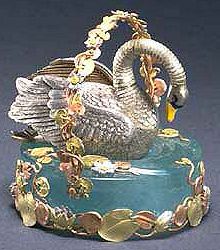 Origin Nikolay II gift of mother Maria Fyodorovna. In 1927 Swan Egg was one of nine eggs sold by All-union association Antiques in Moscow to Emmanuilu Snoumenu, Vartski, London. In 1933 it is sold to Charles Parsons, London. 1939, sold by Hammer Gallery in New York on behalf of Charles Parsons, to King Farouk from Egypt. In 1954 La Veil Rjussi, New York is sold. It is sold to doctor Morisu Sandozu. About 1995 Fondation Edouard et Maurice Sandoz, Lausanne, Switzerland.

Gold Egg is covered by matte lilac enamel within the bent lattice of a tape decorated with diamonds. At top the big diamond under diamond is visible year, "1906". Other big diamond is established in a basis, under diamond possibly when that there was a monogram. The surprise - the Swan, settles down on the big aquamarine simulating lake, the swan is executed from gold and covered by silver. Under one wing there is a winding mechanism. After factory the swan spreads wings, and moves a head and a neck.

Will pay your attention, to other easter imperial eggs Faberge, Moscow Kremlin Egg created in honor of celebration of Easter of 1903 by the Emperor with the Empress in Moscow, and the most beautiful Peacock Egg.