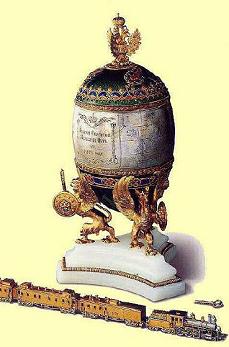 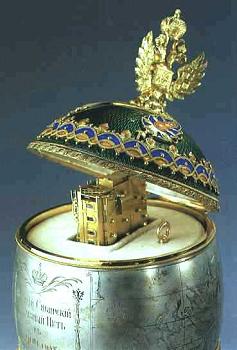 Stamp the company - "Faberge"; masters - "MP", St. Petersburg district Assay Control - a woman's head in a headdress with a sample of "56" and the initials of the district manager of Liapunov Ya "Yal". 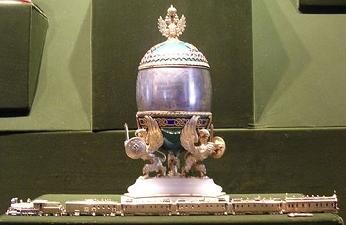 Origin Gift of emperor Nikolay II to the empress Alexander Fedorovne for Easter of 1900 Has arrived from Currency fund Narkomfina in 1927.

Egg with a cover on the hinge is executed from silver, in an average part it is decorated by the engraved image of a card of the Russian state with the Trans-Siberian highway and an inscription "the GREAT IRON WAY By 1900". In egg the working model of the train consisting of a steam locomotive and five cars. On the first the inscription is engraved: "the DIRECT SIBERIAN MESSAGE", on the second, the third and the fourth - "FOR LADIES", "FOR SMOKERS", "FOR NON-SMOKING", on the second - "the second class", "24 PLACES", on the third and the fourth - "the first class", "18 PLACES". The fifth car is intended for church. The model mechanism is got by a gold key. This Easter egg - the characteristic sample of a memorable gift product, created in firm in honor of important historical event - buildings of the Trans-Siberian highway, inspired by emperor Alexander III and Nikolay II continued in reign. The road has connected the European and Asian parts of Russia, the largest industrial cities to military port Vladivostok that has impulsed to intensive development of extensive Siberian suburb.

Pay attention to others, jewelry of empresses, Gatchina Palace Egg, with a tiny copy of the Gatchina Palace, a residence of the Widow of the Emperor out of St.-Petersburg, or Clover Egg.