Egg Winter - is created by Faberge's firm as the Gift of Emperor Nikolay II to the mother Maria Fiodorovna for Easter 1913. It is at present stored in a private collection of the Emir of Qatar. 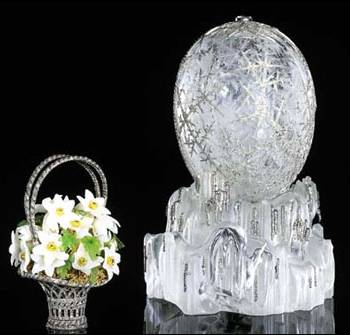 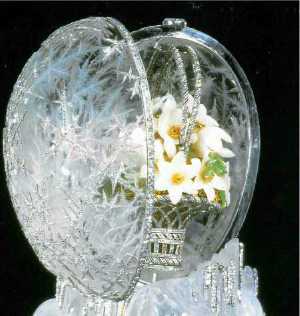 Origin Nikolay II gift to the mother Maria Fiodorovna. In 1927 it is sold by Antikvariat all-union association to Emmanuel Snoumanta, London, 1394 it is sold to Lord Alington, London. with 1848, belonged to sir Bernard Ekstein, Great Britain. 1949, it is sold. To Bryan Ledbruk, Great Britain, Disappeared approximately in 1975 after death of of Ledbruk. 1994, it is revealed in the London safe. November 1994, it is sold by the Geneva Christie's auction to the telephone applicant acting for the American buyer. 2002, it is sold by the New York Christie's auction to the applicant acting for the Emir of Qatar.

It is stored Private collection Qatar.

Gold Egg is established on the basis from the rock crystal issued in the form of thawing ice, with streams from platinum and diamonds. Egg from rock crystal, at top, a moonstone, is thin the cut-out transparent body of Egg, with an engraving modeling ice crystals, egg is divided into 2 halves, the rim of each of which is executed from the platinum decorated with brilliants. A surprise - a platinum trellised basket decorated with diamonds. each flower, it is realistic cut out of integral white quartz with a gold wire in the form of a stalk and stamens, leaves are cut gracefully out in nephrite, on the basis of a basket, is engraved "by Faberge 1913".

Pay attention, on other eggs created for a family of the Emperor Faberge's jeweler house, devoted to an anniversary in an imperial family egg the tercentenary of House of Romanovs, and one of eggs created at the beginning of the First World War egg the Red cross.