Yusupov's egg, is made in Faberge's jeweler workshop, by request of prince Felix Yusupov, as a gift to wife Zynaida Yusupova, on the occasion of their 25th wedding anniversary in 1907. Since 1958 Lausanne, Switzerland belongs to Edward and Maurice Sandoz's fund. 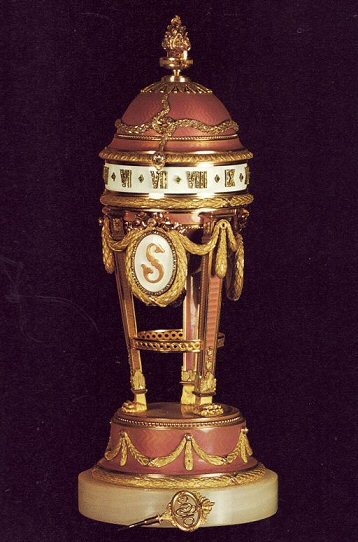 Materials It is made of yellow and red gold, diamonds, emeralds, pearls, rubies, white onyx, transparent crimson, both pink, and opaque white enamel.

Origin It is presented by the Prince Felix Yusupov to his wife Zynaida, on the occasion of their 25th wedding anniversary. It is possibly sold by the Russian officials in Paris or Berlin. 1949, belonged to dealers in London. With 1953, belonged to doctor Maurice Sandoz, Switzerland. About Edward and Maurice Sandoz's 1958th collection. Lausanne, Switzerland.

It is stored Edward and Maurice Sandoz's fund, Lausanne, Switzerland.

Egg is made as a bracket clock, in Louis's XVI style, the rotating dial is covered with white enamel, the Roman figures are decorated with diamonds, egg costs on three pilasters which bases are executed as a paw of a lion. Egg is surrounded by a gold garland which contains three oval medallions, it is considered that on medallions miniatures of the Prince Felix Yusupova and his sons, Felix and Nikolay are represented. Under medallions now, instead of miniatures, gold inscriptions of M, Y and S, the initials of the last owner, Maurice Sandoz, surrounded with small diamonds.

Pay attention, on other eggs created by Faberge's jeweler house, made by request of Malboro Duchess - Egg Hours Pink with the serpent or the Scandinavian Hen Egg.